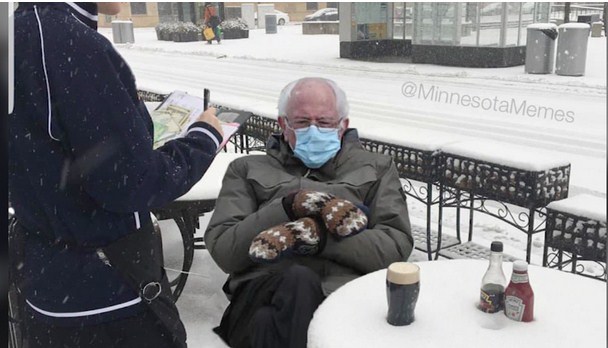 On Inauguration Day, Senator Bernie Sanders stood out from the rest of the crowd when he wore a cozy mitten with a casual outfit, miles away from the formal attire expected for such events. Soon social media was talking about nothing else as a lot of folks fell in love with the dressing. Not the typical response a lot of people might have expected,

Unsurprisingly, Jen Ellis, the Vermont school teacher who made the pair of mittens for Sanders, soon had a lot of demand from people who wanted one. However, she told them she had run out of stock. Ellis soon recommended them to other craft sellers in online stores.

“Thanks for all the interest in Bernie’s mittens!” Ellis tweeted. “I’m so flattered that Bernie wore them to the inauguration. Sadly, I have no more mittens for sale. There are a lot of great crafters on ETSY who make them.”

Ellis had given Bernie the mittens while he was on a campaign trail a few years ago. She said she was quite surprised when the Senator actually loved them and started wearing them to important events. Ellis made her mittens from repurposed wool sweaters, alongside fleece made from recycled plastic bottles.

Sander soon became a huge favorite among meme collectors who loved his “grumpy chic” look when out on public events. His new attire with the mittens only adds to the collections of meme enthusiasts. So viral was the inauguration photo of Sanders that it was photoshopped onto many iconic TV and art scenes, including Game of Thrones, The Last Supper, and The Breakfast Club. He was even transformed into the prince of a town called Bel-Air.

Now, the image has found its way into T-shirts and mugs. Sanders also became a marketing tool by many ETSY sellers who referenced their mittens to be “Bernie inspired.” Vendors used the same marketing ploy during the presidential campaigns when a fly perched over former Vice President Mike Pence’s head during the debate. Biden’s supporters were soon selling their wares, referencing the incident.

Ellis admitted that she is overwhelmed by thousands of requests from prospective customers who want to buy from her. However, she said she was unable to meet such requests that were now running into their thousands. There are hundreds of such orders pouring daily, Ellis explained.

She said she didn’t want to disappoint her customers who made such orders since the mittens were unique and took time to mass-produce. Many social media users admit that the ability of such a banal photo to go viral is exactly the kind of distraction the world needs at this time,

Sanders was also the creator of a mitten trend last year when he wore them to the Women’s March in New Hampshire. Ellis was flattered on how a gift to the Vermont Senator spiraled into a full-fledged business that attracts patronage from high-profile individuals. She said he has since been distracted from her academic duties since the mittens trend was revived after the inauguration.