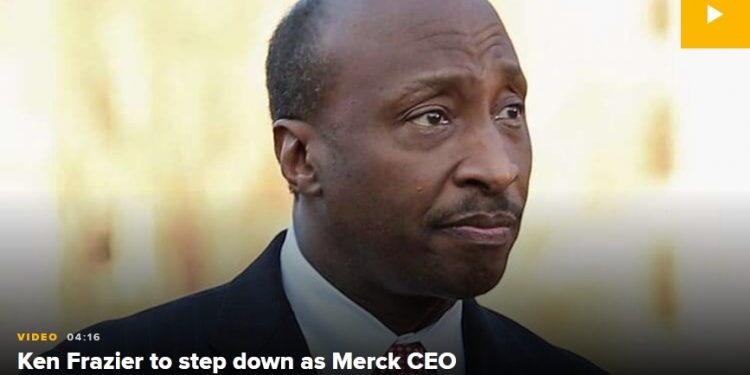 Kenneth Frazier, CEO, and chairman of Merck, is set to retire after spending almost three decades at the helm of affairs of the pharmaceutical company, according to a statement by the drugmaker on Thursday.

Frazier is one of the few black executives in corporate America. Frazier, who took over as CEO in January 2011, is one of the fiercest critics of former President Donald Trump.
In an official statement, Frazier said it had been a great privilege to serve as Merck CEO for about 10 years. He said he had the opportunity to work not only with a dedicated management team, but talented employees that made up the company’s workforce. He noted that in his temporal role as executive chairman, he looks forward to teaming up with Davis in taking the company to even greater heights.

An outspoken executive who made his opinions known at every given point, Frazier was one of the CEOs who led other members to resign from the American Manufacturing Council set up by the last administration when Trump aligned with far-right and neo-Nazi groups in the aftermath of the violent protest in Charlottesville, Virginia, in 2017, CNBC writes.

An advocate of racial equity, Frazier urged other CEOs and corporate leaders to lead the mandate against racial discrimination and inequalities by creating the right environment for employment opportunities. He recognized education and financial literacy as tools to bridge the gap among the haves and the have-nots.

With the departure of Frazier, corporate America will only be left with three CEOs overseeing the management of a Fortune 500 company. They include Marvin Ellison at home improvement retailer Lowe’s, Rene Jones at M&T Bank, and Roz Brewer who is set to join Walgreens Boots Alliance. Roger Ferguson at financial services company TIAA is set to retire at the end of March.

Frazier started as an attorney. He was a respected prison reform advocate who led the successful appeal of a black inmate on death row. The prisoner had been falsely accused of murder.

Davis, who is set to become the company’s president effective from April 1, joined the drugmaker as CFO in 2014. Prior to that, he was in a management position at Baxter International and had also worked in Eli Lilly. He holds a law degree and MBA from Northwestern University. Davis, 54, sits on the board of several other companies.

Merck was one of the few pharmaceuticals involved in the production of COVID-19 vaccines, an operation the company called off last week. The company said it will focus instead on treatment modalities.

US Contemplates Adding Alibaba and Tencent to Blacklisted Chinese Companies