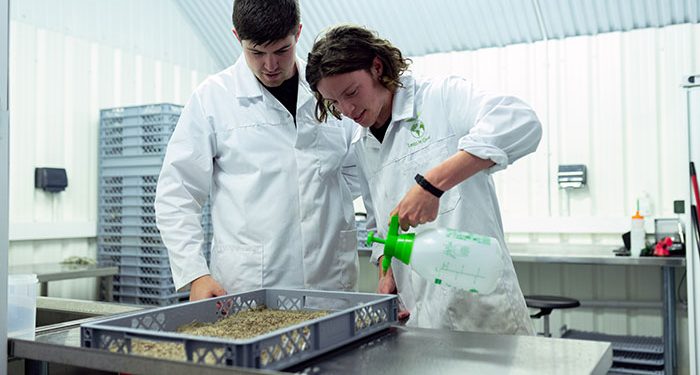 A team of scientists from Washington State University (WSU) has created genetically-modified livestock as “surrogate sires” to enhance food production. In a study published in the journal Proceedings of the National Academy of Sciences, the gene-edited animals can produce characteristic sperm from desired donor animals to sire healthier, bigger, and disease-free offsprings reared for meat production.

By the success of the scientists, they have created cows, goats, and pigs that are genetically-modified through CRISPR-Cas9 technology as surrogate sires. With this gene-editing technology, the team of scientists led by a reproductive biologist at WSU’s College of Veterinary Medicine, Jon Oatley, removes the gene that enables male fertility from the embryos of the animals that would be used for surrogate sires.

The male animals are then born sterile but when they mature, the scientist’s transplant stem cells from desired donor animals into their testes, and then they begin to produce healthy sperms carrying the characteristics of the donor stem cells animals. This way, the animals can sire other animals born with the characteristics of the selected donor animals to produce healthier and disease-free offsprings that can be raised for food.

“With this technology, we can get better dissemination of desirable traits and improve the efficiency of food production,” Oatley said. “This can have a major impact on addressing food insecurity around the world. If we can tackle this genetically, then that means less water, less feed, and fewer antibiotics we have to put into the animals.”

With this science, goat and animal breeders in remote regions of the world can obtain the genetic materials of elite animals and transplant these into their own animals to breed precise animals that meet their needs. The gene-edited animals which are produced from surrogate sires end up being more productive and requiring fewer resources in terms of water, drugs, and feed.

The major problem however is that most countries have regulations that forbid the rearing of genetically-modified animals. Oatley said the success of the project is only a proof of concept, meaning it is a demonstration that it actually works and can work in any given situation anywhere in the world – given that governments would accept it.

“Even if all science is finished, the speed at which this can be put into action in livestock production anywhere in the world is going to be influenced by societal acceptance and federal policy,” said Oatley. “By working with policymakers and the public, we can help to provide information assuring the public that this science does not carry the risks that other methods do.”