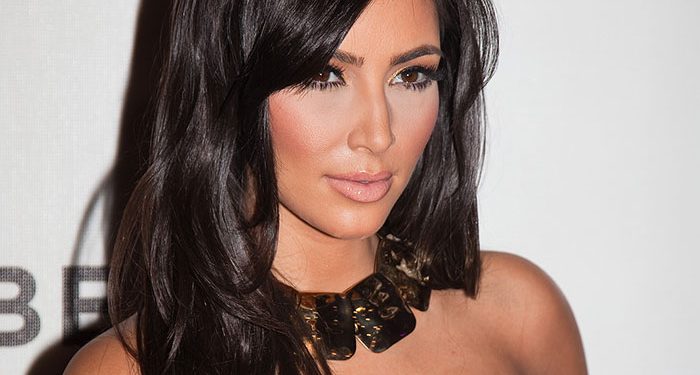 Kim Kardashian has started receiving birthday gifts from good wishers for her 40th birthday. On Friday, Kim posted a picture of herself rocking one of her gifts – a customized bikini shirt dress designed by Alexander Wang with the caption “Best birthday gift”. The bikini dress shirt has an imprint of Kim’s body along with hundreds of crystals, Yahoo News reveals.

“HBD to the most iconic body of our generation,” Alexander’s handwritten note which Kim posted on her stories on Instagram read.  “What better way than to crystalize it!”

Kim accompanied the crystal-studded shirt dress with the label’s diamond-studded sandal heels. She expressed the shock she felt when she received the shirt with an imprint of her own body. The picture printed on Wang’s gift shows Kim’s body in a hot two-piece pink bikini which she had worn in August during a photoshoot in Mexico to model her newest makeup products.

Another sizzling Instagram post shows Kim slaying in a backless skintight Givenchy dress. The reality star posted three pictures in the blackless black dress all captured from the back showing a full view of her prominent backside. The backless dress gives a sneak peek of Kim’s butt and a sexy G-string. She tagged Givenchy and the brand’s creative director, Matthew Williams.

The post gathered a total of 4.1 million likes in less than 16 hours. Some of the KKW Beauty founder’s fans think that the dress is a miss. About 1,000 users liked a comment stating that the thong cheapens the dress. Another fan shared apprehension that people will begin to rock backless dress revealing their thongs just like Kim has done.

Kim has also announced that SKIMS her brand that provides shape-enhancing outfits will be bringing back the 2000s with Paris-Hilson-style velour sweats. She posted a picture of her and Paris Hilton rocking the sweats. Kin stated in her caption that she has always loved tracksuits and it is a pleasure to bring them back with SKIMS.

Kim and Paris Hilton have always been close. Kim served as Hilton’s stylist before she became more famous than Hilton but fame has not dampened their closeness.

Kim and husband Kanye are spending more time with their kids. A source revealed that Kanye who previously posted different controversial posts on his social media platforms is “doing better”.

“Spending time with their family has been good for them,” the source stated. “Kim is being patient with Kanye. They are not focusing on past or future events but keeping the atmosphere light and fun for the kids. They are enjoying spending time together during the vacation.