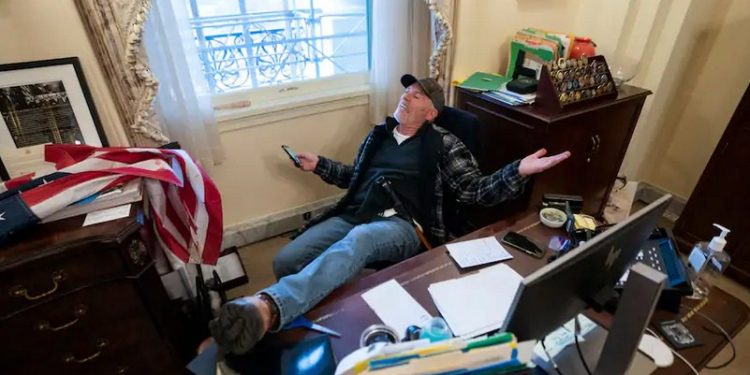 The Trump supporter that was pictured in House Speaker Nancy Pelosi’s office on Wednesday, with his legs on top of her desk, has been identified as Richard Barnett, a resident of Little Rock, Arkansas. The Department of Justice announced on Friday that Barnett has been apprehended in his hometown, Ktla reports.

The DOJ is charging Barnett for intentionally gaining access into or staying in a restricted structure or grounds without legal permission, breaking into Capitol grounds, and theft of public money or documents.

According to a Facebook post, Barnett took offense when Pelosi used the term “white nationalist”, in a way he described as “derogatory”. The 60-year-old wrote on Facebook that he is a white man that loves his nation and if that makes him a white nationalist, then those that do not identify as “white nationalists” should exit the country.

His post was made on Saturday, just four days before a large group of Trump supporters violently occupied the Capitol, an incident that led to the death of five people. Barnett’s two Facebook accounts which have since been suspended show that Barnett is a Trump supporter and a gun rights advocate. He also loves conspiracy theories which he shared freely on his accounts.

He shared theories about how COVID-19 was created and how COVID-19 vaccines are dangerous and should be avoided. Like President Donald Trump, Barnett also shared evidence-free claims of voter fraud in the presidential election. He was a part of different protests in a bid to overturn the election results.

The 60-year-old man was clearly prepared for war on Wednesday, going by a Facebook post he made, urging people to turn up en masse for the protests. Barnett stated in the post that he came into the world with someone else’s blood on him and that he doesn’t mind going out the same way. He accompanied the post with a picture of him posing with a rifle.

Ken Kohl, Washington’s lead deputy federal prosecutor told reporters that Barnett entered the speaker’s office and removed a mail from her desk, but Barnett denied that in an interview. The 60-year-old stated that he only took an envelope which he had bled on. He explained that he left a quarter on the desk to cover the cost of the envelope.

“The image showing Mr. Barnett with his feet up on the Speaker of the House’s desk was quite repulsive,” Jeffrey A. Rosen, acting US Attorney General stated in a press release.

The release added that after the picture went viral, investigators used surveillance footage and an interview that Barnett granted to identify him before his identification was confirmed using law enforcement databases. He was then arrested in Little Rock on Friday. Acting D.C Attorney, Michael Sherwin told reporters that Barnett’s case shows the heinous acts that Barnett and others perpetuated on Wednesday at the Capitol. The prosecutor added that his office is ready to prosecute all of the participants of the violent protests “to the full extent of the law.”

Barnett will be extradited to Washington, D.C., where he might face a prison sentence of up to a year if he is found guilty.

Apple is Reportedly Building a Search Engine to Compete with Google