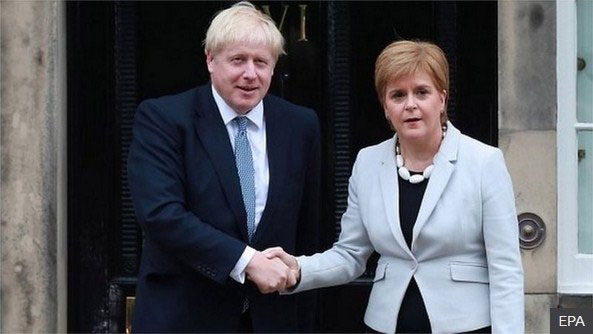 Different reactions have trailed the UK Prime Minister Boris Johnson’s comments in which he dismissed devolution as “a disaster north of the border.” Johnson described the step as former Prime Minister Tony Blair’s biggest mistake during a Zoom call with 60 northern Conservative MPs on Monday evening. The SNP and Labor have since condemned Johnson for his speech.

Downing Street reacted to the condemnation and explained that the comments referred to Scottish National Party mismanagement.

The comment by the prime minister will be seen as especially reckless as support for Scottish independence is growing in the 2020 poll. The comment also comes as both Scottish and Welsh governments complain about a lack of communication from the UK Parliament during the coronavirus pandemic.

However, the Communities Secretary Robert Jenrick said that Johnson has always supported devolution.

“What he does feel strongly, and I would agree, is that devolution in Scotland has facilitated the rise of separatism and nationalism in the form of the SNP, and that’s trying to break apart the United Kingdom.”

He said someone like the prime minister, who wants to ensure the continued existence of the United Kingdom, thinks the actions of the SNP are hazardous to the corporate existence of the UK. Blair spearheaded the devolution, in a process that saw Scotland and Wales voting for a separate parliament while the unionists and nationalists in Northern Ireland formed a coalition.

Devolution describes the Parliament of the United Kingdom granting a greater level of self-government to the Scottish and Welsh Parliament and the Northern Ireland Assembly. Devolved powers include health, housing, fire services, education, and some areas of transport – although Scotland has always maintained a separate educational and legal system.

The UK government maintains power in core areas like defense, foreign policy, and taxes. The Scottish first minister reacted via Twitter, saying that with Johnson’s comments, the Tories have shown they’re against the current powers of the Scottish Parliament and do not support devolving more powers to Scotland, BBC reports.

Johnson’s meeting was made from Downing Street, where the prime minister is currently self-isolating after prolonged exposure in a parliamentary session with an MP who turned positive for the coronavirus. Johnson spoke with Tory MPs, who are part of the Northern Research Group that have complained about the adverse impact of the lockdown measure on the north of England.

Ian Murray, Labor’s shadow Secretary of State for Scotland, has come out to say that devolution is of the party’s proudest achievements. He said Johnson’s comments revealed the prime minister was against devolution and that the stance would put the future of the UK at risk. He said instead of the PM working with Scotland and Wales to proffer solutions to the pandemic, he had allowed his ineptitude to cost the citizens in various respect.

Scottish Labor’s Anas Sarwar tweeted that it was Johnson who turned out a disaster and not devolution. He said the PM has handled the pandemic poorly and was a threat to the existence of the United Kingdom. The UK will be involved in vital elections in the coming months, and the SNP has started campaigns for more power devolution.