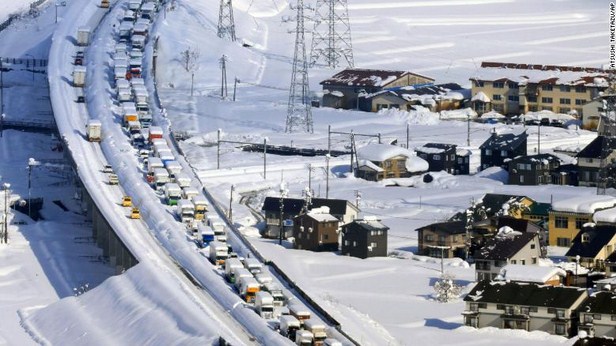 A snowstorm in Japan on Thursday night kept more than a thousand cars stuck in a traffic jam that stretched to about 9 miles long. Passengers in their vehicles were left stranded with little in the way of food or water.

The jam occurred on the Kanetsu Expressway, which connects Tokyo and Niigata prefectures. Traffic started building up along this route as early as Wednesday. By Thursday morning, a monster jam had built up, requiring the authorities to shut down the highway to help lessen traffic.

According to Nippon Expressway Company (NEXCO), the agency responsible for operating highways in the country, the cause of the jam was traced to a car that got stuck in deep snow, right at the center of the highway, causing traffic to cease.

The northern and central parts of Japan had witnessed severe snowfall earlier that morning. The snowfall prevented vehicle movement, and some communities even lost connection to the power grid.

According to NEXCO, Thursday night was the peak of the traffic jam. During this time, the jam was more than 15 kilometers (about 9 miles). While some vehicles were able to move intermittently, others were held firmly in place, with the jam keeping some vehicles at a point for over 40 hours.

The jam was still in place in the early hours of Friday. While vehicles coming from Tokyo were able to move at some point, vehicles going to the country’s capital were stuck. Reports said that as of noon on Friday, up to a thousand vehicles were still held in traffic. Aerial images of the scene showed vehicles covered deep up in the snow.

On Thursday, there was some form of help for the stranded drivers and passengers when emergency services began sharing some light snacks such as rice balls, bread, biscuits, candies, and bottles of water. There were also thousands of liters of gas and diesel for cars, which must have run out of fuel. However, it did little to protect drivers who had to battle the stark cold of the night.

One of the drivers stuck in the traffic told news outlets that the food and drinks he brought along for his commute had been exhausted. He said when he became thirsty, he had to rely on melting the snow to afford drinking water.

According to Niigata’s crisis management officer, Tsuyoshi Watanabe, two persons, a young lady in her 30s and an elderly man in his 60s, were taken to the hospital when they developed respiratory problems during the long traffic jam. However, there have been no reports of any deaths or other complicated incidents since the jam started.

Watanabe said the district had asked the authorities to deploy Japanese Self-Defense Forces to help clear up the snow while providing food, water, and gas for people who were still stuck in the jam. Portable toilets were also a top priority.

Actor Tyrese Gibson and his Wife, Samantha, are Getting a Divorce