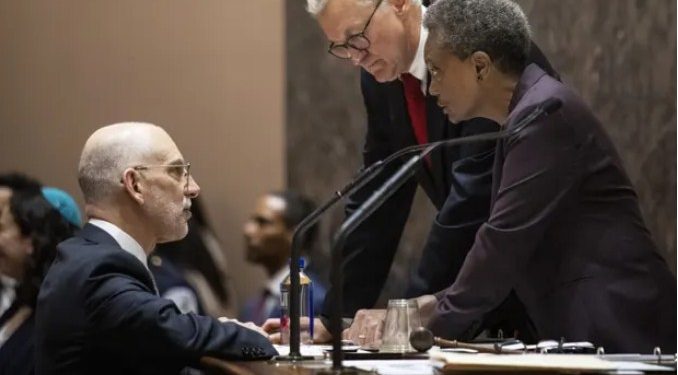 Corporation Counsel Mark Flessner, who was Chicago’s top lawyer, announced his decision to resign from the position on Sunday, citing the backlash he has been receiving as a result of his alleged role in trying to cover up a wrongful police raid. In February 2019, Anjanette Young’s home was raided by officers of the Chicago Police Department. Young had been prevented from getting dressed and handcuffed in her home. Police later admitted that they had raided the wrong home.

Flessner sent an email to employees to announce his resignation. In the email, the attorney stated that he was not responsible for trying to cover up the wrongful raid, as he only got involved in the case, last Monday. Lawyers, under Flessner, representing the city had tried to stop Young from getting parts of the bodycam footage of the incident. The city had also initially attempted to sue Young for breaching the confidentiality agreement.

“It is quite evident that we must all learn from the tragedy of the wrongful raid of Anjanette Young’s home,” Flessner stated. “It is very important that we, as a community, always rise against racial injustice, and we keep advocating for equality within our justice system.”

Flessner did not reveal if a higher authority had mandated his resignation but the attorney revealed that he was resigning because of the “firestorm” surrounding his department’s efforts in trying to cover up the footage. He told reporters that he has been wrongfully accused of trying to hide the tape.

“I am devoting time to conduct a complete review of everything that happened during the incident, and I will ensure that corrective actions are taken and those who are responsible will be held accountable,” the mayor stated.

The video, which has fuelled racial injustice controversies, showed officers forcibly entering into Young’s apartment. The woman kept trying to tell the officers that they have the wrong address. In the video, Young was handcuffed and covered with a blanket which later fell off her shoulder, leaving her bare body visible.  The officers had purportedly been acting on a tip that there was an armed felon in the apartment.

The suspected armed felon was later discovered in a neighboring apartment to Young’s home. Lightfoot has denied being involved in the city’s law office’s request that the video should not be made public. A judge turned down the request last week, allowing media outlets to air parts of the 40 minutes long footage made in Young’s home. For most of the footage, the black woman was handcuffed and distressed, trying to explain, as the officers searched her home, that they were in the wrong house.