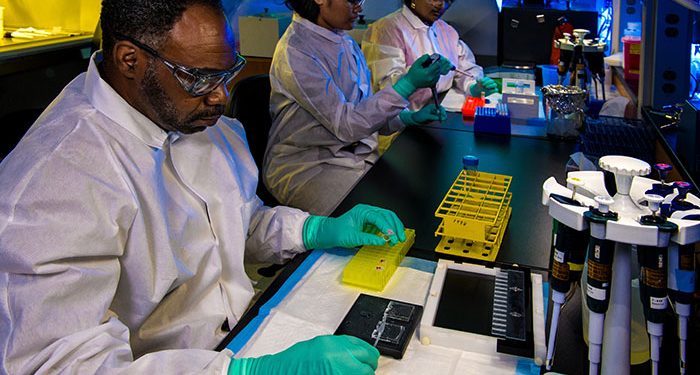 Using fossils of baby tyrannosaurs discovered in western North America, scientists now have a clear idea what the young ones of these predators that walked like a colossus on the Earth 71-75 million years looked like – a little dog with a really long tail, National Geographic writes.

Scientists found the fossils which showed the baby tyrannosaurs still in their embryonic stage, a stage where they would have been in the safety of their eggs. The claw bone was discovered in a site in the Horseshoe Canyon Formation in 2018, located within First Nation Lands in Alberta. Another vital part of the fossil was discovered. It is the jaw bone found in the Two Medicine Formation of Montana in 1983.

When they were first discovered, researchers were not aware of the import of their discovery. It took years of careful analysis for them to realize the significance of their find. At the annual meeting of the Society of Vertebrate Paleontology, Gregory Funston, a paleontologist with the University of Edinburgh, discussed this latest discovery.

Many researchers agree with this discovery, including Oklahoma State University paleontologist Evan Johnson-Ransome. The latter said the bones found matches the features of other dinosaurs and resemble their relatives known as tyrannosaurs.

Funston, the lead researcher in the study, said the discovery of the fossils gave scientists the opportunity to learn about baby tyrannosaurs, a field of study that was uncharted territory at that time. He said no one really knew what baby tyrannosaurs looked like because there was not enough evidence to support detailing their physical features.

The new fossils tell us that compared to their adult counterparts, baby tyrannosaurs were very tiny. Their adults grow up to be almost thirty feet long, but their babies were just about three feet. While the jaw bone discovered came from a baby tyrannosaur that was only two and a half feet long, the toe belonged to a one that was a little above three feet long. While their babies may be very tiny at birth, the adults grow to be massive creatures measuring thirty tons.

According to the jaw analyzed, the shape of their teeth – blade-like, showed that the newly-hatched tyrannosaurs feed on insects and lizards. And as they grow, their diet became varied. So, they ate smaller dinosaurs by the time they had reached the eleven age-mark, and when the predators turned twenty-two, they ate herbivores or even other tyrannosaurs.

The latest study has made researchers turn their sights toward making more discoveries. Scientists have often wondered why baby tyrannosaurs and their eggs have proved challenging to find, unlike their relatives, the dinosaurs. This new study demonstrates that these fossils have been there all this while. Researchers just didn’t know where to look. The fossils of the baby tyrannosaurs were discovered where Scientists found the fossils of other species of dinosaurs.

Armed with this new knowledge, the lead researcher of this study said he is going on more expeditions to make new discoveries.