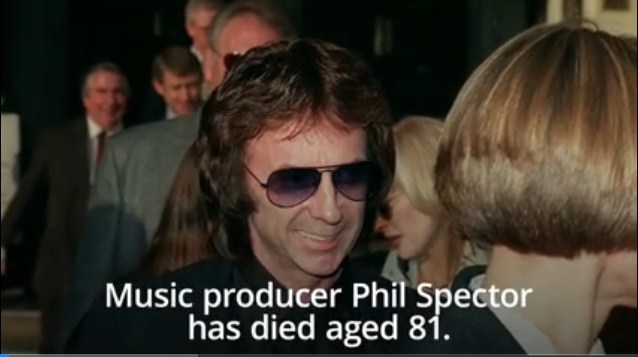 The California Department of Corrections and Rehabilitation announced the death of Grammy-winning American record producer, Phil Spector, in a statement on Saturday. Spector, who died at 81 years old, died of natural causes but a post-mortem medical examination will still be conducted to ascertain the cause of death. The department stated that the San Joaquin County coroner’s office will carry out an autopsy on the body.

On February 3, 2003, the body of Lana Clarkson was found sprawled on a chair in the hallway of Spector’s palatial home in California. Clarkson was an actress, who according to witnesses, had reluctantly agreed to follow Spector to his home. After a widely publicized murder, because of the type of people involved, Spector was found guilty of second-degree murder and sentenced to 19 years to life imprisonment, six years after Clarkson died.

After the conviction, Spector spent the rest of his life in a prison hospital in California. Spector denied any involvement in Clarkson’s death, claiming instead that she accidentally put a bullet through the roof of her mouth. One of Spector’s workers, a chauffeur, told investigators that on the day of the incident, Spector had come out of his home holding a gun with his hands covered in blood and revealed that he might have just killed a person, CNN reports.

As a record producer, Spector’s career started very early when he was still a teenager in high school. Raised in Bronx, New York, Spector formed the Teddy Bears band and produced the band’s song “To Know Him is to Love Him.” The song is the only hit attributed to the group. Later on, Spector worked with many other stars including The Beatles, Ike and Tina Turner, and Cher.

Spector was such a brilliant producer that his distinct style, which later became known as the “Wall of Sound,” was imitated by other producers in the 60s. He was known for producing tracks with many layers of instrumental tracks and percussion and this style was used in many hits produced under his label, Phillies. In 1972, he was named the producer of the year in the Grammys for his work on George Harrison’s album, “The Concert for Bangladesh.”

Spector, who was also a Rock and Roll Hall of Famer, consistently denied being responsible for Clarkson’s death. After the verdict was given, he berated the “sloppy” work done by the investigators. The defense attorneys had argued that Clarkson’s failing career had pushed her to suicide.

Donna, Clarkson’s mother spoke with reporters after Spector died. She described the late “Barbarian Queen” star as a loving and friendly person whose love for life has helped the family cope with the loss. Clarkson, who died 18 years ago at 40 years old, would have been 58 years now, her mother added.

NASA Announces Mars Digger is Finished, Two Years after it Arrived at Mars