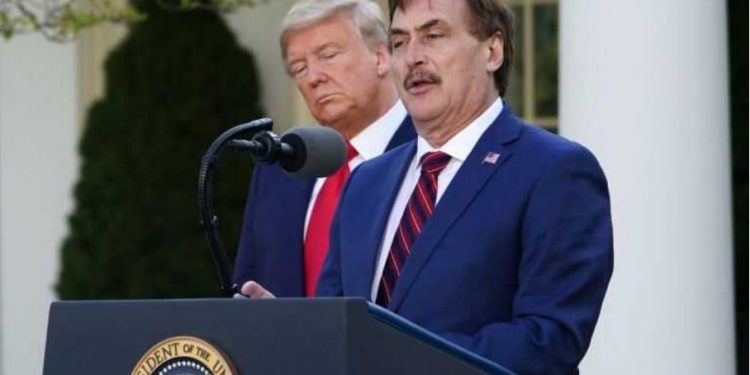 Mike Lindell, a staunch supporter of President Donald Trump and CEO of Minnesota-based bedding company, MyPillow, told reporters that major retailers that used to sell his products are dropping his products as a result of the backlash they have been receiving for supporting his company after the CEO’s unsubstantiated voter fraud claims, Yahoo reports.

The CEO said Kohl’s, Bed Bath & Beyond, HEB Stores, Wayfair, and Canadian shopping channel, Today’s Shopping Choice, have all dropped the company’s products. In an email sent on Tuesday, Lindell revealed that the retailers told him that some of their customers have threatened to stop patronizing them if they continue to stock MyPillow goods. Lindell said the retailers were even attacked by a group of angry people.

“We periodically modify the products we offer our patrons,” a representative of the New Zealand company said. “We have decided to remove some of the brands and items that are performing poorly and one of them is the MyPillow brand.”

Lindell came under fire after his many allegations that the machine used in the November 3 presidential election was rigged to favor President-elect Biden. Just like Trump, Lindell has been very vocal on Twitter about his claims, Fox News writes.

Many senior officials have looked into the claims and refuted them, describing the election as “the most secure in American history.” Dominion Voting Systems, which produced the machines used for elections in about 28 countries, wrote Lindell on January 8 telling him to withdraw his evidence-free claims about them helping to rig the election or face a lawsuit.

The company stated in the letter that Lindell has made several promises to expose his claims that Dominion tampered with its machines so that the result of the election will favor Biden. According to the company, Lindell expended different resources, including a huge sum of money to investigate his claims, but the CEO could not produce any evidence that shows that Dominion is involved in any of the alleged international conspiracies to wrest power from Trump.

Dominion’s attorney also filed a lawsuit against Sidney Powell, a former member of the Trump legal team, earlier in the month for her claims that Dominion helped rig the US election just like it helped Hugo Chávez rig elections in Venezuela. Dominion is demanding that Powell pay $1.3 billion in damages.

Lindell said he sent an email to the Supreme Court to prove that Dominion colluded with China and other countries to rig the elections. According to reports, he did not add an attachment to the first email he sent. After he was told to include one, he sent another email with an attachment that included no file. His third email was sent with screenshots of unreadable texts.