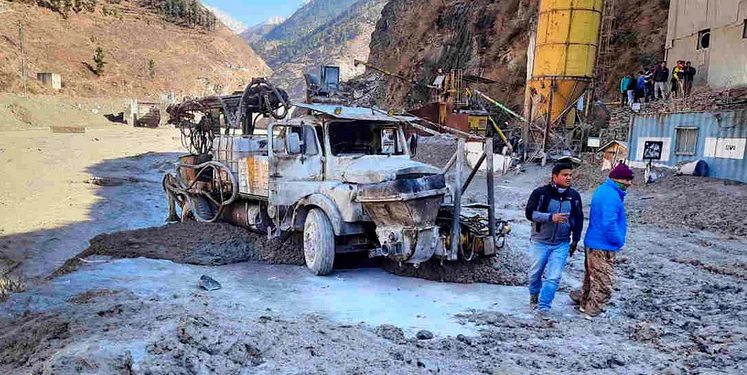 Local authorities in India reported on Sunday that a part of a glacier in the Himalayas broke off and resulted in flash floods that claimed the lives of at least 14 people with many more still missing. A rescue effort to rescue over 100 people started in the aftermath of the flood which was caused by the Nanda Devi glacier in the northern part of the country, authorities say.

A part of the Nanda Devi glacier fell apart and sent ripples of water, rock, and mud through a dam that was being built in the area to generate electricity. The incident happened in Uttarakhand, one of the States in the Asian country. Experts had previously warned that structures such as dams should not be erected in the region, as a result of its location and frequent flash floods and landslides that have claimed the lives of thousands.

One of the local inhabitants of the region, Sanjay Singh Rana, told reporters that the floods came so fast that there was only time to run. Authorities say that 12 construction workers who were caught in tunnels have been rescued but many more are still missing as a result of the suddenness and brutality of the floods, which started just before 11:00 am local time.

A similar but more devastating incident happened in the area in 2013, when heavy rainfall led to very heavy floods, killing almost 6,000 locals. Authorities said it is still unclear why the glacier broke off because the glaciers have not started melting yet. Local residents of the village have left the area moving downstream away from the dam, NPR reports.

India’s Prime Minister Narendra Modi has confirmed the disaster in a tweet, stating that the country is praying for the safe return of the over 140 people that are still missing. The glacier is on a namesake peak which is located in a National Park with the same name. It is the second-highest peak in the Asian country at over 25,000 feet high.

National Thermal Power Corporation, the country’s utility management board announced that the flood destroyed one of the sides of a construction plant just down the river. The Tapovan Vishnugad hydropower plant is 70% complete and expected to generate 2.5k GWh of power every year. The corporation did not release any other information about the extent of the damage to the plant.

In the aftermath of the flood, experts have urged the government to take the disaster as another sign that the construction projects in the area need to be stopped. The country’s ex-minister for water resources, Uma Bharti tweeted that she always advocated, during her time in office, that power construction projects should be taken off the Himalayan region as a result of the condition of the area.

Ranjan Panda, who does volunteer work on issues related to the environment and climate change, stated that the government should take the incident as another sign to stop the hydroelectric projects in the region, adding that authorities should take the words of environmentalists and stop ignoring the warning signs of disaster in the area.