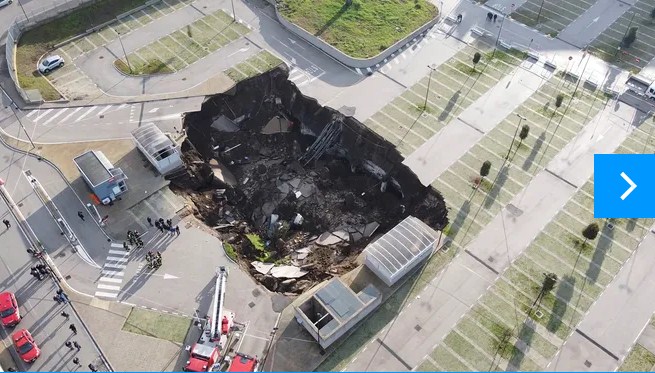 Six COVID-19 patients were evacuated from the coronavirus ward of an Italian hospital after a huge sinkhole measuring 22,000 square feet in width and 66 feet in depth opened up in the hospital’s parking lot. The hospital, located in southern Italy, reported that the sinkhole opened up at 6:30 am local time on Friday. According to the local fire brigade, three vehicles that were parked in the parking lot entered into the sinkhole.

The Ospedale del Mare hospital is located in Naples in southern Italy. Naples Police told reporters that an investigation is being conducted to establish the cause of the sudden collapse. The representative of the department said that the sinkhole could have been caused by the heavy rainfall that has plummeted the area for over two weeks. The representative stated that it has, however, ruled out the first speculation that an explosion caused the collapse, adding that no one was wounded.

The hospital lost power as a result of the collapse and continued using a backup power supply until Sunday, according to hospital officials. The collapse also temporarily affected the hospital’s water supply, report says. Vincenzo De Luca, the regional governor stated that the affected COVID-19 ward, where recovering COVID-19 patients were being monitored, will be reopened after the utilities were completely restored, Wcvb reports.

“We were concerned about the interruption of utilities because we know it can endanger the activities of the hospital,” the regional governor stated. “Fortunately for us, nothing was really affected, though there was a power outage, it was later restored and currently, the hospital is functioning perfectly.”

The fire brigade said that to ascertain that no one was trapped in the chasm, tracking dogs were deployed to sniff out anyone that might have been trapped. The department said that it discovered no such thing.

The hospital housed the famous Napoli 1 COVID-19 Center built by the county to combat the first deadly wave of the virus in the country. Containers were used in the hospital car park to attend to patients as the hospitals easily got overwhelmed.

Sinkholes often occur naturally, according to the US Geological Survey. They can happen suddenly or collapse gradually until they get very deep and wide. Human activities such as construction and certain immersive plumbing activities can also open up sinkholes, the USGS adds.

The world’s largest sinkhole which sits in a province in China is 2,100 feet deep.