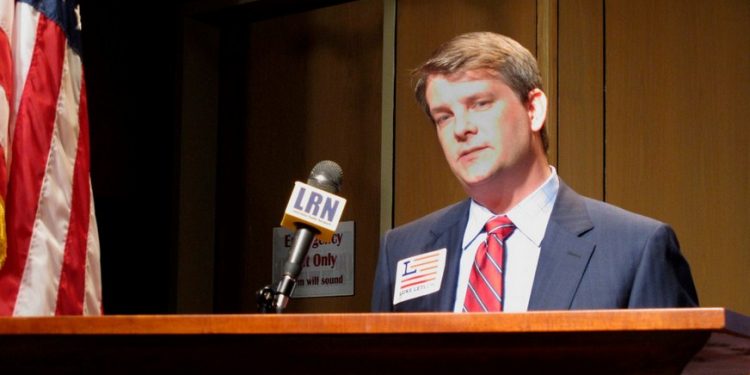 Congressman-elect Luke Letlow has died from COVID-19 according to a statement released by his spokesman on Tuesday evening. Andrew Bautsch, spokesman for the late congressman, in a post via the deceased’s Facebook page, confirmed that Luke Letlow, 41, passed away late Tuesday at Ochsner-LSU Health Shreveport due to COVID-19complications.

Bautsch said the family of the Republican congressman-elect appreciates all the support and prayers from friends and well-wishers over the last few days, but requested that the family be given the much-needed privacy to mourn at this challenging period. All funeral arrangements will be communicated soon, he said.

Letlow had announced on December 18 that he was down with the coronavirus infection and was admitted to the intensive care unit at Ochsner LSU Health in Shreveport. Letlow was the chief of staff to former Rep. Ralph Abraham before succeeding his former boss. His inauguration into Congress was slated for this Sunday before he passed on.

Although many lawmakers have tested positive to the COVID-19 since the pandemic began, he becomes the first member or member-elect to die from the virus. Letlow was initially admitted at St. Francis Hospital in Monroe on December 19. However, when his condition worsened, he was transferred to the ICU at the hospital in Shreveport.

Lawmakers and lobbyists from Congress have reacted to the news of Letlow’s death. House Minority Leader Kevin McCarthy said in a statement that the House was saddened to learn of the sad news. A delegation of lawmakers from Louisiana, led by the House Minority Whip Steve Scalise, issued a joint statement which contained their condolences and warmest regards to the Letlow’s family.

According to the statement, Letlow was a free-spirited individual who had a bright future ahead of him. He had dreams of serving the people of Louisiana in Congress, and the entire Louisiana lawmakers waited to welcome him into their fold before his tragic passing. The statement also described Letlow as a loving family man whose life was cut short by the dreadful coronavirus disease that has affected millions worldwide.

House Speaker Nancy Pelosi, in her tribute to Letlow, described him as a Louisianan who fought for the ideals he believed in and had dedicated his life to public service. She said the entire House grieved his passing and prayed that his surviving family finds solace in so many other families affected by the evil virus.

Rep. Liz Cheney (R-WY), head of the GOP conference in Congress, decried the death of Letlow. She described as devastating the news of his passing and said her prayers would be for his family.

Before his stint as the chief of staff to Rep. Abraham, Letlow was in the administration of former governor of Louisiana, Bobby Jindal. Jindal said via a Twitter post that he first met Letlow when the late congressman-elect was still in college. He said Letlow’s passion for service was evident right from the very beginning.

After Rep. Abraham refused to seek reelection, Letlow indicated his interest in running for the post. Letlow defeated Rep. Lance Harris in a December 5 runoff to resolve who represented Louisiana’s 5th District in Congress.

He is survived by his wife Julia and their two young children.

Jonathan Pollard, Convicted US Spy Who Spent 30 Years in US Prison, Arrives Israel