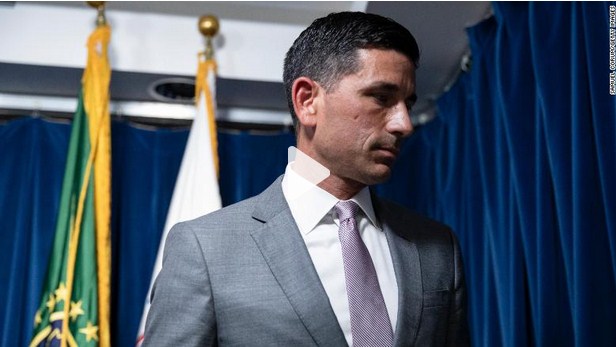 Acting Secretary of Homeland Security, Chad Wolf, has resigned. He cited several lawsuits challenging the validity of his appointment as part of the reasons for his resignation, and the fact that hundreds of President Trump’s supporters invaded the Capitol on Wednesday to cause mayhem. Pete Gaynor of the Federal Emergency Management Agency will be taking over from Wolf as acting secretary of DHS.

“I am saddened to take this step, as it was my intention to serve the Department until the end of this Administration,” Wolf wrote. “Unfortunately, this action is warranted by recent events, including the ongoing and meritless court rulings regarding the validity of my authority as Acting Secretary. These events and concerns increasingly serve to divert attention and resources away from the important work of the Department in this critical time of a transition of power.”

Wolf served as the DHS acting secretary for 14 months before his sudden resignation. Since the invasion of the Capitol by Trump supporters last week, Wolf is the third cabinet-level Trump official to resign from their positions. The first is Education Secretary Betsy DeVos and Transportation Secretary Elaine Chao.

Wolf had released a statement following the attack on the Capitol, saying the incident was “tragic and sickening”. He condemned the situation where “we now see some supporters of the president using violence as a means to achieve political ends.” He said the development was not acceptable and urged all elected officials, including President Trump, to denounce the Capitol incident in its entirety.

However, the chairman of the House Homeland Security, Bennie Thompson, raised issues with Wolf’s resignation given the political crisis across the country and the FBI’s warning that armed protests across the 50 states of the country are imminent. He said the timing of Wolf’s resignation leaves much to be desired since the DHS failed to properly protect the Capitol against invaders, and the fact that the administration recently hit rocks at the court after a federal judge dismissed the government’s attempt at sweeping immigration and asylum reforms.

“He has chosen to resign during a time of national crisis and when domestic terrorists may be planning additional attacks on our government,” Thompson stated. “Unlike others, he is apparently not leaving the Trump Administration on principle.”

As it stands, almost all the major federal security apparatuses in the United States are headed by acting leaders, and these include the Department of Justice and the Department of Defense. But while Gaynor agreed to serve as acting DHS secretary until January 20 when Joe Biden will be sworn in, FEMA Region 9 Administrator Bob Fenton will head FEMA in an acting capacity until the new administration appoints a substantive head.